Sort of....no we're not pregnant (phew!) but we did have twins.  Welcome to our world, Olaf and Sven!

This blog will be on the more technical side, going through the process of how we decided to choose what we did versus options available, careful destruction (removal) of the former system and surprises, and installation of the Olaf and Sven.  If you're bored by this kinda stuff, check out the pretty pictures and wait for Monica's next blog post.

So on Friday August 21, Jack took his final breath, see post from Friday Aug 21.  After that we had to jump into action to research and decide what type of system we would be changing to and whom to buy it from.  Fortunately we had some insight going into this, neighbors of ours had recently swapped out their reefer system to a keel cooled freezer with evaporator so they became a quick source of information for us.  Our family friend Greg recommended a fix-it guy to come take a look to confirm Jack's passing and to give a bit of advice on how to move forward.  And, of course, we had internet access.

A little background on refrigeration and cooling systems.

Much like a car with a radiator, refrigerators need to remove heat.  It is the removal of energy (heat) which makes your refrigerator and freezer cooler.  The heat which is removed is carried away by a cooling agent such as radiator fluid.  Then the cooling agent needs to be cooled.  In a car this happens as the coolant runs through a looping circuit of tubes in the radiator cooled by passing air.  In our boat we also have that option, known as an air cooled system, we would just have a fan blowing on the 'radiator'.  Also on a boat we can have ocean water sucked in and have that help cool down the cooling agent, that's what we had on SeaGlub, aka Jack.  Another option is a 'keel cooled' system.  This is pretty much the same as water cooled system but the cooling agent runs through a 'radiator' attached to the bottom of the boat.  The keel cooled systems seem to be the more popular newer choice because they run fairly efficiently because water acts better to remove heat than air.  Our older water cooled system which brings ocean water onto the boat to cool the coolant requires much more electric power and electrical power on a cruising boat is a precious commodity.

So the the first 24 hours after Jack's passing were spent deciding on what type of system.  Since we had just lost our water cooled system, which included an electric pump to cycle water through the refrigerator in order to cool the cooling agent back to a liquid, we already had a hole in the boat (aka thru-hull) to use in the event we wanted to upgrade to a keel cooled system,  After a blitzkreig of web surfing and various phone calls and the visit from the fix-it gentleman, we came to liking Technautics CoolBlue air cooled system (for those familiar they also manufacture the Cruise RO Water Makers).  Several reasons for us:

1) very low power draw, 3-4 amps per hour (about what your halogen light bulb uses in your reading room
2) track record - they have been around for over 3 decades
3) customer service - they were excellent throughout the process, always returning calls and emails promptly, critical as they advertise this as self install product
4) 5 year guarantee

Why we didn't choose a keel cooled system?  First we would've needed a haul out for that.  Secondly, the CoolBlue system would allow us to reuse the existing coldplates, and personally I prefer the idea of coldplates over evaporator system despite the fact that the coldplates take up so much room.  In the tropics I just like the idea of having a thick, cold plate storing coldness and allowing the compressors to run less often.

So that's how we got to where we were.  And of course we chose the system so clearly we liked what we were doing and going to be biased to it, but I see the benefits of the other systems and maybe even other providers, but I can tell you we were extremely pleased with the service we received from Technautics.  So now for the process of removing and installing....

I'm not sure what was more difficult, getting the old system out or the new one in, or..... stressing out about how to install the new one with no hands-on help.  Removal was a bit ugly, here's the old set up:


Mounting the new compressors was a unique challenge.  Originally as we measured the CoolBlues they would fit just right by no less than a half inch but after trying to put them in they were actually a half inch too big in overall area.  What we did was took the old mounting board and cut it, then drilled holes and inserted set screws into the plastic mount board and locked them tight with epoxy. Then, flipping the board over we put rubber stoppers over the screws then mounted the compressors on top of these.

The only problems we had when reinstalling were mounting the coldplates back into the reefer and freezer.  The coldplates are heavy and getting them reinstalled took the both of us contorting and sweating but we got them back up.  Then we realized it may have been easier had we connected the 2 coldplates together before mounting them back into the freezer.  The picture below shows how close we were to having a perfect mounting set up, but that half inch to get these two copper tubes to connect took us about an hour....but alas....

And finally there was the electrical.  Mechanical and construction skills I have just enough to be dangerous, electrical work I'm just dangerous.  This was the circuit board for Jack, with a solenoid, relay and all kinds of wires.

We were able to gut the old system of all the extraneous items because of the simplicity of the Technautics system.  Below is what we were left with. 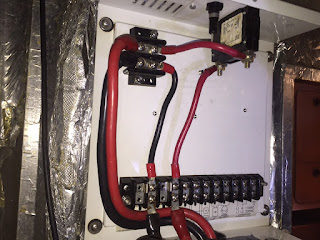 And of course, the first thing back in the refrigerator..... (don't worry, the beer was still in the cooler on ice) 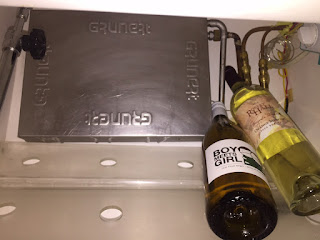