The TIP Pendulum in Mexico

"Yet what business had I with hope?  It was, as I say, a half formed thought - man has many such which are never completed."

Edgar Allen Poe - The Pit and the Pendulum

So it's 2015.  A couple of years, plus or minus, from the fiasco that was the Mexican boat import mess.  Latitude 38 did a great job of keeping everyone as up to date as possible, for me it was just educational, for others it was life changing. Scroll to the bottom of this link [Latitude 38] for just one example.  When the Mexican government had a case of severe miscommunication between departments and several hundred boats were seized, not necessarily taken away from their owners as I understand, but some were locked up and all were told they couldn't leave until they had completed the paperwork necessary to be properly registered.  The paperwork they had already filled out.

You can all kinds of research on your own on this topic, and unfortunately the reputation damage may live on for way too long, but I want to take this chance to start setting a new record of events for checking into Mexico while it's still very fresh.

Last week we headed to Mexico for a 5 day trip to Ensenada, just because.  We hadn't sailed SeaGlub since making our passage from San Francisco to San Diego in July and a group of friends had come up with the idea that we ought head down for a week or so.... call it a Baja HaHa hangover from all the parties we attended here in San Diego, we were craving more.

But first SeaGlub and crew had to get legal, and after all the stories from 2013 I was apprehensive to say the least to get started with this project.  Low and behold, I'm here to tell a story of success, one of a large governing body recognizing a problem and ameliorating it.  Our experience the last 4 weeks, applying for and receiving our TIP, our visas, and physically checking in and out of Mexico was streamlined and effective, actually making sense through the whole process.

We were going to Ensenada for 5 days, a month before we were to leave I logged on to Banjercito main website to begin the process of getting my TIP.  I was given the direct link but it wouldn't work, maybe it will for you, www.banjercito.com.mx/registroVehiculos/, but it didn't at the time for me, so from the main page I clicked on the link in the picture below, the only part of the page which was in English so was easy to find. 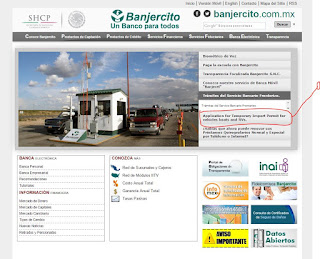 From there it takes me to the www.banjercito.com.mx/registroVehiculos/ web page, which looks like this:

From here it's just basic process of entering your personal information, hull number, registration number, engine number if you can find it (see my picture below, was on top of my Yanmar) and then pay the fee at the end. 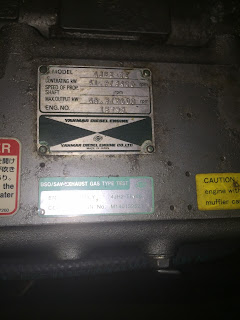 It was fairly straight forward, the one item I missed was at the bottom of Step Four it asks are you bringing any Recreational Vehicles.  I said no but on second look I could've said yes for my dinghy as one of the options in the drop down menu is: Boat Less than 4.5 Meters.  However, when I cleared in at CIS and asked if this was a problem they said no.  I was basically offering to pay more and they said no.....

Next up, it's necessary to send them copies of your registration and passport.  It says so in Step One.  As thorough as I was trying to be, I missed that part, but don't worry, Mexico didn't.  The very next morning, at 645am my time, I received an email informing me that my form from 12 hours ago hadn't been fully completed because I hadn't sent the copies.  I simply replied to the email with pictures from my phone of each and 24 hours later received an email that I would receive my TIP in 2 days via DHL.

WHAT?!  FOR REAL?!  I'M DONE?!  That just seemed too easy, but sure enough two days later I had my TIP.  The pendulum has swung!

Pretty awesome, now this TIP process is almost too easy.  So many government agencies could take a lesson from this.  They had a problem, major one for many people, and bad enough to likely scare away hundreds of others, they addressed the problem, and... and... and actually fixed it!

The one caveat I have to mention, which was unbeknownst to us, was a Port Fee.  Hadn't heard of this but we had to pay $385 pesos upon arrival and departure, a Mexico port fee.  The schedule was listed on Window 2 and looked to be there a while so maybe it's not new but it was news to me.  Take note though, if you arrive / show up to check in or out on the weekend the fee is double, so plan accordingly.  Also, the day you plan to check out, you must be there before 1230pm and I would advise being there much earlier.  If you're not checked out by 1230pm you have to come back the next day.

One last item, apparently there's a fee checking back into the USA as well, $27.50 and they take cash only at the San Diego port.  Below is an explanation of the fee and how to pay it, but when I log on there's no link for the decal.  If you figure it out let me know.  It's only good for one year, and only the calendar year, so wait until January to purchase it.

Overall the experience was extremely efficient and I say Kudos Mexico!  I look forward to our next visit, and to a much longer stay in the years to come.