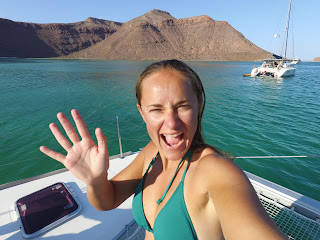 Last week we were fortunate enough to be invited to go along with our friends from the Bay Area sailing school, Tradewinds, on a charter trip with over 30 people on four different boats to explore the southern islands of Baja California.  We had a phenomenal trip and will be putting together an extended video of our time there (but that will have to come in about a month after we aggregate everyone's photos and videos and after Chris returns from helping another friend bring his boat to San Diego from San Francisco this month).

In the meantime, while it was still fresh in our minds, we wanted to submit a few things we learned while on the trip:

1. it gets hot in the Sea of Cortez but, as predicted by our trusty admiral and captain, it was noticeably cooler while on the water, even at anchorage, than it was just hundreds of yards away on the land, maybe by as much as 10-15 degrees cooler!

2.  in reference to point 1, shade is critical.  Sitting on the boat at anchor, or even while sailing, it was hot in the sun.  We are now extra motivated to get our long awaited boom cover sewing project underway which, once finished, should provide adequate acreage on deck to comfortably hang out during the heat of the day.

3.  contradictory to the above points, the heat didn't drive us to believe we couldn't survive without an air conditioner.  Mind you we were there at about the hottest time of the year, and temps were exceeding 100 degrees daily, however the mornings and late afternoons were comfortable.  The hottest part of the day was from about 11am - 3pm, and since we were waking up at 6-7am and going to bed at 10-11pm we were still getting plenty of time to snorkel, hike, play on toys, fish, and generally explore around

4a.  good hiking shoes, not too heavy duty but full foot coverage as there were plenty of stickers trying to sneak their way into my Keens sandals.  We'll be looking into something more like water shoes.

4b.  and this goes for our puppy Tessa as well.  She's gonna love all the beaches and hikes but the sand can be incredibly hot and the stickers will like her paws even more than our sandals so we're going to research some doggy booties

5. and about snorkeling - there were lots of stinging jellyfish, best to check the water with a quick dip off the swim step before heading out and diving face first off the bow.  We managed to swim everyday, most days you'd just get the occasional sting but some days were worse.  We adapted throughout the week by wearing long sleeve rash guards and before returning next year we will be investing in some swim pants to go along with our long sleeve rash guards

6.  because we're likely to be swimming everyday, and the Sea of Cortez is beautiful but not exactly thriving with stops to load up on fresh water, certainly not piers or docks where you can connect to a hose, a water maker, at least to us, is going to be essential.  We have one on board but haven't used it yet.  About time to fire that up and see how she's working.  We did stop at a couple of places with water but we're talking about lugging heavy water jugs back and forth in a dinghy multiple times.... and how much extra capacity are we really going to carry in empty water jugs?  Those things aren't small and therefore not the easiest to stow.

7.  since we'll be running our water maker probably every 2-3 days battery power is important.  We're feeling like we've probably done what we need to with that, we will have 3 new AGM batteries totaling 735 amp hour storage, and our recent solar upgrade will likely prove worthwhile.


(sidenote: we have 185g of water storage, we don't plan on using that much in 2-3 days but in order to keep from pickling the water maker, we'll likely choose to run the water maker more often for less time rather than trying to run it for several continuous hours to make up for half an empty tank)

8. again, hard to put in words how gorgeous the scenery was, but we were surprised by just how many boats were in the anchorages enjoying that scenery with us, especially given the time of year (officially hurricane season).  And we're not talking cruising boats, we saw several large yachts in each anchorage, including some up 200 feet

Overall, we had a great eye-opening time.  It really is quite gorgeous, the sailing was good, fishing was fun (one of our boats caught a blue marlin!), the anchorages are protected with good holding, and different anchorages are very close to each other.  We're looking forward to getting down there again in 6 months and spending more time at each place and checking out many more!