After 10 great days in the Sea of Cortez on the charter trip (see post here) I was granted an opportunity to sail with recent retirees Mark and Terry southbound from San Francisco to San Diego with several planned stops along the way.  I was really looking forward to this for several reasons, getting back out on the water, sailing with good friends, and maybe actually getting to sail this passage versus our passage last year on SeaGlub where we motored the whole way to Point Conception.  Well.... I wasn't let down.
We left on a Sunday with predicted winds of 18-20kts near San Francisco and supposed to increase to 25-35 over the next few days.  As we left the slip the winds in Marina Bay were 16-18kts and we knew we were about to get some real sailing in under our belts.  Thanks to Terry we had several pre-made meals like chili, spaghetti, and elk ghoulash where all we would have to do is heat them in a pan to eat, plus we had a thermos we'd fill with hot water to make Cup-o-Noodles for the rougher parts of the passage.  As we exited under the Golden Gate Bridge, the weather was pretty crappy, and therefore pretty easy for us to say goodbye. 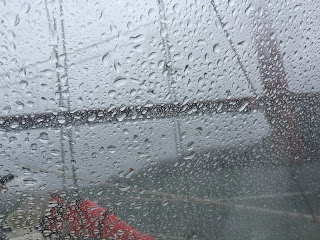 But the crew was in good spirits and very well protected inside Starbright's cockpit enclosure.  As fate would have it, though, we were teased by Mother Nature for as soon as got outside the Gate, the winds virtually stopped!  Huh?!  What happened to the 16-18kts blowing us out there?  What happened to the predicted up to 35kts???

Ask and you shall receive....

A few hours later we put the sails back up and then made days of 150 and 165 miles and rounded Point Conception our third morning out to sea.  We did find the 25-35kts, and we had sustained winds of 20+ all through out the nights, and we stayed double reefed pretty much the whole trip (and we did make it all the way to Santa Barbara despite the tracker shutting off somewhere before our final destination - 380 miles!).  As you can see from our track, we basically did two gybes per day, once before dark taking us well offshore, then again in the morning in preparation for the winds to pick up and take us back to within sight of shore.  We had a blast and Starbright performed magnificently! 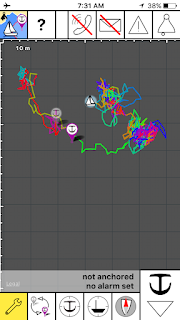 We also stopped in Smuggler's Cove, beautiful place and easy anchorage with good holding, but for the second straight year my experience was less than recommendable.  The exposure to the south swell in summertime can and did for my trips leave the anchorage a bit too rolly.

From there we headed off to Two Harbors Catalina, had a great couple of days, then headed to Dana Point, a new marina for me(by boat at least).

The guest slips were reasonable rates and generally available if you call ahead, you can even reserve months ahead of time.  The anchorage was the surprise to me - bigger and deeper than I had expected, I could see us going back there on SeaGlub later this year.

After 12 days we arrived in San Diego where Starbright took up her new temporary residence in the San Diego cruiser anchorage which is available to non-San Diego residents for up to 90 days - for free!  You just have to stop by the customs dock on Shelter Island and request a Cruiser Anchorage Vessel Inspection (mostly just checking that head thru hulls are closed and no oil or fuel in the bilge).

We had a great trip and I want to thank Captain Mark, Terry, their wives and especially Monica for a granting me this time away from home.