Not the start we were hoping for, but....

It's been about a week now since we left Ensenada and really began our cruising lives. We don't expect easy, in fact that would be disappointing, challenging is acceptable, but this last week was beyond that. And being our first week out, it was trying. This blog site has several purposes, to keep family and friends posted about our happenings and whereabouts, to tell a story to those interested, to educate those considering a similar adventure, but always to be honest, with the good and the bad. I've read blogs for several years, contacted many of those travelers, and learned much from their sharing. We hope in some way we can do the same for others. In that regard, here's what we learned in our first week out to sea....

We left Ensenada with the plan to day hop, 40-70 miles a day, almost all the way to Cabo. Not because we were weary of overnight passages, but because the one commodity we own a lot of is time and we're willing to take our time. The first night out we didn't reach our desired location before dark due to lighter than forecasted winds and fearing crab pots and an unknown anchorage, we set out to sea and aimed for our next destination. That evening was, of course, when the winds and seas picked up. We had no less than 30 knots of wind all night and uncomfortable mixed seas. The winds did, however push us far enough south to reach our next anchorage by morning and we had a great time there in San Quintin. The night passage was rough but not a killer, it just wore on us because we hadn't mentally or physically prepared for an overnight (meant: we didn't get enough sleep prior).

Leaving San Quintin after a nice 24 hours, which included a couple of romps on the beautiful beach, we headed to Punta Baja, a well known point providing some respite from the local northwest winds and swell. We arrived before dark, set the hook and then began to realize maybe this was a mistake. The anchorage was horribly rolly, to the point where things were flying out of cabinets and I ended up sleeping on the settee with the lee cloth keeping me put. Meanwhile, Monica toughed it out in bed but slept not at all. After checking weather (one nice thing is how well the SSB and modem have been working) we decided the incoming storm 4 days away was going to be a doozy so we aimed for an overnight trip to get to the safest anchorage we could, Turtle Bay about 175 miles away. We left in the morning, this time knowing what to expect.

The winds helped, blowing 30-35 all night and pushing us in the correct direction, but that much wind in the absolute dark of night will keep you from sleeping much. We arrived at Turtle Bay 30 hours later and settled in happily to a comfortable anchorage. This occasion was bettered by the running into friends of ours on Shamaya, another Hylas. We got together and discussed the incoming storm, consensus was we'd all move to the south anchorage before the storm hit. That night was comfortable at anchorage but we awoke to the south winds already blowing and decided to pick up and move. An hour later we were settled in and watching winds build.

The winter storm that ensued was like something I've only seen from the dozen or so hurricanes I've encountered as a traveling surfer. We experienced 59 knot gusts, sustained winds of over 40 knots for 6 hours, then a complete 180 degree reversal of winds at 230am, in the dark, with torrential rains. Our anchor held, as did the 5 other boats with us, and we all basically stayed awake until sunrise. That morning we motored back over to the north anchorage as the winds were now blowing 30-35 out of the west and the south anchorage had become too uncomfortable. Well... the north anchorage wasn't much better as the large west northwest swell rolled in, even into Turtle Bay we had 10-12 second period 6 foot swell lines rolling at us from beam to beam. Yet another extremely uncomfortable night.

But if days like these are able to make you stronger, and allow you to enjoy the better days that much more, than consider us ready. Now two days after the storm, we are sitting in 70 degrees and sun, a smooth anchorage and enjoying taking Tessa to the beach and having a cold beer or two. And the weather reports look promising for the next week or so. Our plan is to stay put for 4-5 days, relax and enjoy the sun and tranquility of just staying still. Looks like Friday we will start heading south again with Mag Bay our next long term stop maybe a week later.

So in summary, we've fought through an ugly week, but still have our spirits up (but certainly tested) and are comfy where we currently sit. 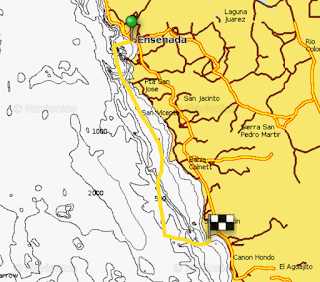