After 8 days in Turtle Bay, mostly to wait out 72 hours of weather, we finished up with a couple of nicer days where we could actually bare walking the town. It was nice to get out and on our feet, get some exercise and explore a couple of local restaurants. Strange thing, to us at least, was the 'open' hours of the town. Pretty much everything was closed until around sundown (except for the markets, which there were plenty, they were open normal hours and Thursdays are the days the fresh produce is brought in!). At sundown, however, the town of TB came alive. Taco stands, hot dog carts (several) and many more restaurants all started to open there doors. I can only imagine this is a result of normal summer weather around here where maybe it's so hot during ht day that no one leaves the house until it begins cooling off after sunset. Altogether, we had a nice stay at TB after the storm but 8 days was plenty. Onto to Asuncion.

Bahia Asuncion is about 55 miles away and thus a good daytime sail. We left at sunrise to light north winds but, of course, right after we got out of the bay into the open ocean, the winds picked up as the sun got higher and suddenly we were sailing in 30-35kts with 6-8' seas on our aft quarter beam (ie rolly and a bit of side to side motion). We kind of laughed it off, apparently SeaGlub only sails in 30+ knots in Baja. As we were settling in and making great time, running downwind and doing 7.5-8kts with a full genoa and double reefed main, the winds just stopped. Down to 2 knots. So after 2 hours of great sailing, we bobbed around waiting for the wind to return and finally powered up. After motoring for about 45 minutes, the wind returned this time from the WNW at 15 then 20 then.... you guessed it, 30-35kts again! It was pretty intense as this was the same direction as the medium swell running and the ride got a bit uncomfortable. We ended up making Asuncion before sunset and anchored next to our buddy boat Shamaya (look them up on Facebook, another Hylas). Landing the dinghy was a breeze in this protected bay, we went ashore where all the pangas were beached and then we went to town with Shamaya, walked the streets and found the friendliest face you could imagine waiting to serve us a delicious dinner at Loncheria Mary on the main street.

Asuncion is awesome, if we had a choice (weather not being a factor) we'd much prefer staying here than TB, although I'd be weary of Asuncion during summer south swells, anchorage would still be fine but landing the dinghy could become adventurous.

Tomorrow, Sunday, we are headed for Abreojos for a few days where we hope to do some whale watching in Laguna San Ignacio. 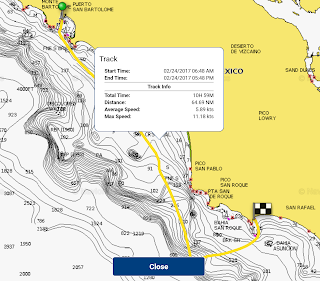