After a couple of mostly comfortable days at Abreojos, we decided to take advantage of the 15-25kt NW winds and overnight the 70nm to Scorpion Bay. But first a few things about Abreojos. We'll call it a decent anchorage, except with any kind of south or southwest swell. The anchorage is comfortable enough but the beach landings become treacherous. The town itself is much like Turtle Bay if not slightly more advanced, paved roads and restaurants which actually opened before 8pm. We found a good gringo restaurant to sit at and use internet, owned by a the saltiest of expats, 60 something year old Ray who was married to a 28 yr old Mexican girl from Ensenada, having moved her to Abreojos because he used to like surfing they now run the restaurant. Ray was extremely hospitable and even let us crash the restaurant on the day they were closed. And if you want the truth about America and Trump, from some 600 miles away, just ask Ray, he's not short on opinion or descriptive verbiage.

The sail to Scorpion Bay was quite good. We left at 6pm with NW winds at 15-20kts. We were joined by Shamaya and recently arrived, and by recently I mean within minutes of us pulling anchor, Sweet Chariot. Sweet Chariot had crossed paths with our friends on Mistcutter and we had been watching for them as we proceeded down the coast. Unfortunately we were pulling anchor at Abreojos just as they were arriving. We radioed them and told them to enjoy the stay and we'd see them soon somewhere south. About 30 minutes later they decided they'd prefer to overnight as well and joined us on the way to Scorpion Bay. The sail was actually very enjoyable if not a bit of work in the first few hours where we saw winds of 35kts or more, but we made great time and arrived to a calm and windless anchorage at Scorpion.

We've enjoyed our time here, we're finally wearing shorts and tshirts with regularity, although the water is still quite chilly, 64-65 degrees. We managed to get the toys down and did some dinghy tow surfing and an attempt at actual surfing on 2nd point, but it was so small my best wave caught was one where I was standing in the water and jumped on the board to catch the ankle slapper! The town is a bit different then those visited recently, there's a lot of gringo money here in extravagant houses. The wave here is world renowned and surfers have been saving money, retiring and building their dream homes here for many years. Most of those homes are out on the point. Inside, where we anchor and where the town is, it's quite small with a handful of the normal things, a school, church, a few aborrotes (general stores) and one or two restaurants with varying quality of wifi. This is the first town we have had no cell coverage so we've been using the Delorme extensively for communication.

Next we're off to Bahia Santa Maria then around the corner to Magdalena Bay to hopefully do some whale watching. Leaving Scorpion Bay maybe Saturday or Sunday. 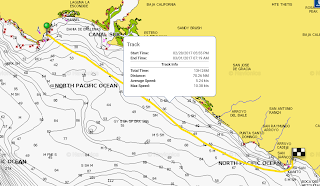 ----------
radio email processed by SailMail
for information see: http://www.sailmail.com
Posted by SeaGlub at 7:51 AM