Here's a whole bunch of pictures from our trip down the Baja coast from Ensenada to Cabo, with stops in San Quintin, Turtle Bay, Bahia Asuncion, Abreojos, Scorpion Bay and a fly-by of Bahia Santa Maria near Mag Bay (weather dictated that we not anchor and keep moving south)

After San Quintin we motorsailed to Punta Baja, had an extremely rolly day and night, and took off ASAP to Turtle Bay after seeing an unfriendly weather report and even more unfriendly surf report.... 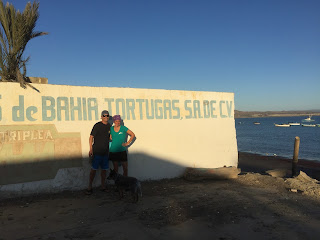 When the storm did arrive we moved to the south anchorage in Turtle Bay but we still had quite the night.  Sustained winds of 45kts for 6-7 hours and gusts up to 58.8 knots!  Our wonderful Mantus anchor held strong with 7:1 scope of all chain rode

Asuncion was a great little town with restaurants and markets, we loved the people and the beach landings were pretty easy.


I hadn't been to Abreojos in over 20 years, last time on a surf trip.  Other than the road being paved now to get out there, not much has changed.  We didn't find much to do, lobster season ended while we there and we were told there was always a big party where everyone showed up at the beach and ate lobster for free to celebrate the end of the season, but an official in the Fish and Game department had died that week so the party was canceled....

We enjoyed our time in Scorpion Bay, the weather finally started to warm up a bit.  Lots gringo money and homes as this is world renowned surf spot.  Dinghy landings were OK as we had very little south swell when we there but I could see them being difficult if the summer swells were around

From Scorpion Bay we were going to head to Mag Bay but as we arrived after an overnight sail, we found 30-35 knot winds in the anchorage.  We could've stayed but the weather wouldn't have been fun to hang out in, just too windy and cold.  So if you look closely at this track, we actually sailed into Bahia Santa Maria, took a look and then tacked back out to the ocean and did another overnight to head to Cabo.  Both Shamaya and Sweet Chariot followed course