The leg to reach Bahia LA was going to involve some longer trips, the first of which to San Francisquito was almost 80 miles, our longest leg on this trip to the Sea of Cortez.  As we went north over the course of the two weeks from SR to Bahia LA we encountered much colder water (mid 60s) and no wind to wind on the nose out of the north and one afternoon of extremely heavy fog.  We did find beautiful anchorages and had two buddy boats with us, cruisingvolare.com and Shamaya.  I'll let the pictures below tell the stories: 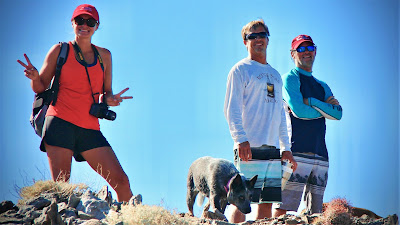 The time of year (or, more appropriately, the time of the month) that we made La Ventana was during a new moon, which meant large tidal swings.  In the picture above, the boats look tight but with plenty of water around.  By 4am things changed dramatically.  On SeaGlub we woke up to a loud grinding noise at 4am, turns out we had our keel swing across the bottom of rocks so we got up and pulled in some anchor chain to get us into deeper water.  As we were doing this we noticed Shamaya was very close to a rock wall, and they had already moved (at 3am).  By sunrise we wanted out of there and aimed to leave, Shamaya left before us, turned north out of the anchorage, and lodged the boat up on a submerged rock with the tide continuing to fall.  Two dinghies and 30 minutes later, Shamaya was clear and moving on with only a 3 foot long scratch on the very bottom of the keel.

Ventana was also where we lost Volare for a month, they had an unplanned visit from friends, but they were going to arrive several hundred miles to the south in La Paz, so Volare and to turn around and get to where they had started.  We would see them again in about a month, but SeaGlub and Shamaya had some further exploring to do....