A few of us tried some offshore fishing today, went out for several hours and fished the 9 Mile Bank.  We saw a few bait balls, dolphins and diving birds, but the only time we got one bite, I failed to hook the sucker.

All in all we had a good time and I want to say thanks to my buddy Chris Parcel for taking us out.   We'll get 'em next time!

You can see our track here on Google Earth, we got our only bite at the southernmost point where you can see us circling around for a bit. 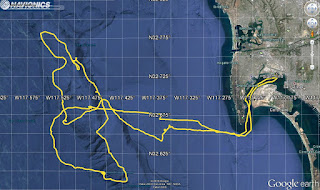 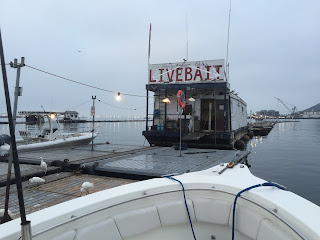 Getting our fish on! 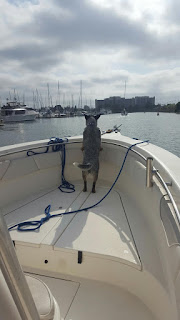 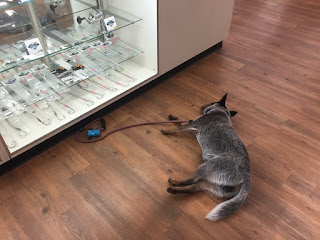 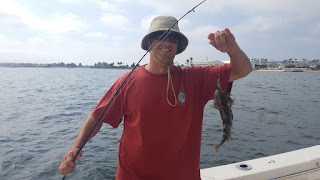 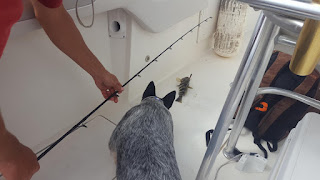 With the engine now working again we're starting to check off some off more fun to-do items, like build a fishing tackle treasure chest! Went into West Marine today and got a new rod and reel and set off with my buddy and Tessa for some afternoon fishing. We were only out for a short bit but I learned how to use my new bait casting reel and we each caught a small bay bass. Tessa didn't really enjoy the shopping part, she decided to take a nap, but she was very interested in the fish coming on board....
Posted by SeaGlub at 6:19 PM


So this will likely be a repeated post over time as we test our ability to generate power and record our usage in different climates and latitudes.  Recently here in San Diego we tested our solar power versus usage and kept stats to measure.  This is obviously important for us to know as we would like to live free from running a generator or the engine to charge the batteries which provide our sole source of power once untied from the docks.

To back up for a second, and explain a few things about power usage / generation and SeaGlub's capabilities (and I'm sure I'm about to explain some of this completely unscientifically and incorrect, but this is how I understand it having come to just learn this in the last couple of years)

First off, the basic equation is:

So voltage is the push of the electricity, in our case this is ~12v.  Think about touching your tongue to a 9 volt battery, stings but doesn't kill you, not pushing that hard.  You ever stick your tongue in a plug socket in your house?  Nope because at 110 volts you'd probably be dead.

So we know we have 480amps of battery storage, so we have to watch our wattage and how long we leave that wattage on.  Think about a traditional light bulb, you select them by the wattage, say 60-80-100, etc.

As I said, we have on board 480amps of battery storage, however you can only safely use half of the battery amps before the volts can no longer push the electricity to the light bulb.  So we really have about 240amps which we can use.

So how does all this measure up?  Well, our newly installed LED light bulbs use about 0.5amps per hour or less, our refrigerator uses about 4amps per hour, and a blow dryer uses about 90amps per hour - so basically if you come aboard you won't be bringing your hair dryer, sorry sis and lovely niece!

Just to further example, if our refrigerator has to run for 24 hours it will use 24 hours x 4amps = 96amps of our 240amps available for the day.

Last month we purchased new solar panels, we used to have 440 watts of solar, we now have 640 watts, which means we can generate about 40-45amps per hour at max exposure to the sun (and so wouldn't be for all day).


Our test results were as follows, and charts below show the flow during the day:

so we nearly use all of of battery storage

Minimum draw at any given time (means nothing running or plugged in):  3amps

so maybe we had the inverter on, the LPG warning system, etc.

We used the most power in the afternoon and evening when the refrig and freezer seemed to cycle on, that would last most of the night and into the next morning before they needed to turn back on.

Solar power generation depended on, first of all, the size of the solar panels.

With the previous 440 watts of solar panels:

With the new 640 watt of solar panels:

Our power generation varied widely over the course of the test from a low of 80amps to high of 270amps, this was a result of San Diego's May gray weather.

As a result of all this, we will continually watch our usage and power generation, I'll likely repeat this test again in July or August next.  One thing we will be doing soon to upgrade is buy 3 new batteries instead of the 2 we currently have, this will put us at 720amps instead of the 480amps currently available.  We also have a wind generator but that really only starts working once the winds hit 12-14 knots, which they did not do during this most recent test.

Moving to the lower latitudes, the tropics, will add new variables, solar panels don't work as well when it is hot outside, the refrigerator and freezer may have to cycle on more often, but we also probably won't be watching as much television or surfing the internet randomly for hours on end....