November was very busy, starting out with my birthday, continued work on the transmission, a haul out for bottom paint, Thanksgiving week and even a new marina!

Had a great birthday, even if the Vikings continued their horrific downfall after a 5-0 start by losing to the Lions in overtime.  The rest of November wasn't much better for them as they went 1-3 and now likely don't even make the playoffs after reaching #1 in the NFL of the press writers power rankings after week 6.  Ahhh Vikings how you do this to us almost every year, get our hopes up at some point in the season only to finish 1-6, miss a 23 yard field goal at home in the playoffs, get blown out 41-0 when you were favored in the NFC championship game, miss one kick all year but turns out it was the one mattered to go to the Superbowl...... I suppose the legitimate reason this year is that they have played with 11 different offensive lineman, a traded for midseason quarterback and no Hall of Fame running back.  Just makes December that much more freed up for me to prep SeaGlub, so here's those updates....

So work continued on the transmission.  Recall after returning from Catalina in September we had excess water in the bilge (more on that issue below) with a layer of some form of engine fluid.  I could see an area of the transmission that appeared to be leaking, the photo isn't that great but the gunk buildup is where I believed the leak was coming from.

After taking quite a while to figure out how to remove the transmission and with help from neighbors Miles and John, we managed to get the gear box out in a couple different pieces.  Little did I know the mistakes I was making by doing that.  You see, the transmission is held together by those pieces I separated and by separating them I was loosening up other oil seals, unbeknownst to me.  So after 6 weeks, and taking the transmission and / or prop shaft off three times, replacing the gear shift cable (that I also managed to strip during this process) we now appear to have a working and dripless transmission.


n.b. - as a sidenote to the additional leaks I managed to create, 1) try to keep the gear box together as one piece when removing, I smashed in the output shaft seal causing a leak by removing the gear box from the flywheel cover, 2) always check parts for corrosion evidence, our coupler (picture below) was badly pitted, and 3) be careful with moving around the gear shift cable, I stretched ours out and was fortunate to make it back to our marina as we lost gear control just as we pulled into our slip!

While removing the transmission I had removed enough parts, wires and hoses to give myself a better look into the bilge areas.  Remember the water leak I mentioned?  Well, I found it and 2 or 3 potential more leaks....  The exhaust hose for the engine was leaking because hose clamps on an elbow were sitting in a low part of the hull and so for years whenever we had any water at all run past them they were getting corroded.  This could've been solved by not placing the hose here or just elevating the hose slightly.  When I went to move the exhaust hose the clamps literally fell off.

All new hoses are now in place for the engine and 80% of the generator.  Thanks again to Miles across from us for his hours of sweat and labor to get the new hoses in, not an easy task bending a 3" steel corrugated hose around corners of the boat.

Moving on from these repairs, we knew we were going to haul out to get new bottom paint and since I had a few struggles with the transmission we figured we'd go to the yard sooner than later so I could get some assistance.  So we got new bottom paint and replaced a thru hull we had some concerns about.  In and out of the yard in 3 1/2 days.  Thank you to Shelter Island Boat Yard, these guys were great! 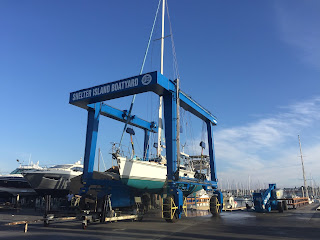 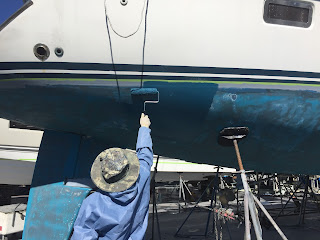 But as always, it wasn't all work and no play.  I managed to get away for a week to Mexico for a camping and surfing trip, awesome time with my bud Andrew and a good trip to confirm that the bay we surfed is indeed an excellent anchorage!  SeaGlub will see you soon.

Monica had a great weekend with family in Big Bear, seeing family, having fun talking and hiking. 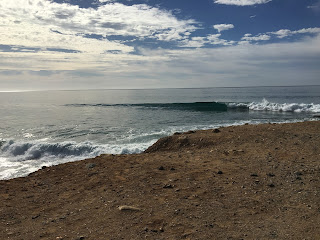 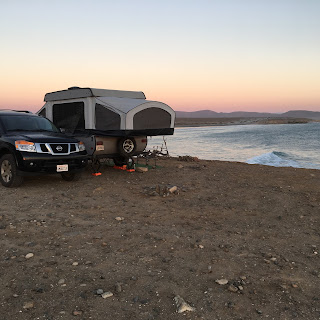 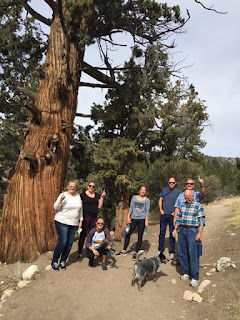 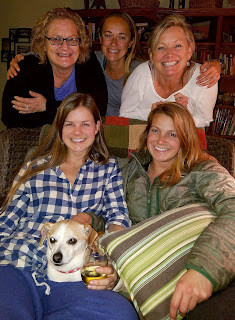 And Tessa is always on either play or sleep mode.  Tessa got to go camping in Mexico for a week and hiking all over Big Bear!  She loves the no-leash-life! 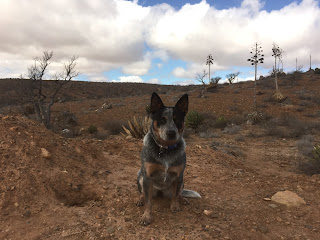 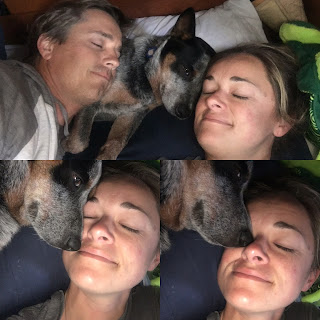 We ended month with our impending departure on our minds, and having friends to help get those things done is always welcome, thus we found a mega yacht slip to share with Misty Cutter.  We're working on several things but none that will keep us from leaving.  Generator for us is the biggest and most important fix it item, SSB radio is getting a new ground cord and Pactor modem, water maker is under producing, need to figure out health and boat insurance, and changing mailing addresses, etc. 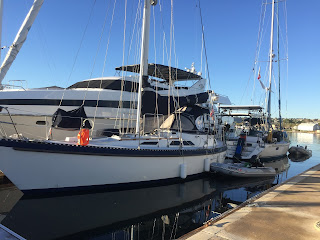 We're planning on having a going away party January 7 and departing for Ensenada 2-3 days later.  We have a bunch of family flying in and would love for you to make it too!

Harbor Island West Marina - all day January 7, 2017 - no gifts please, just your smiles and empty cocktail cup, we'll fill it for you!