We spent about a week and a half in Mazatlan, had a lot of fun hanging out with Pam and Lance again on Shamaya.  The marina (Isla Mazatlan Grand Resort) was a bit further from the beach and walking areas like restaurants etc than we would've liked but the price was right at $23/day!  We found really good food here (surprise!) at ridiculous prices, this meal was $6 per person:


Around Mazatlan we mostly hung out at the beach, which was long walk or short ride away.  We jumped into the back of the pickup truck cabs and for $3 made our way to the beach where Tessa loved swimming and fetching. 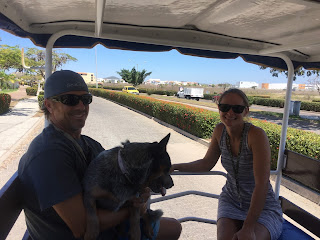 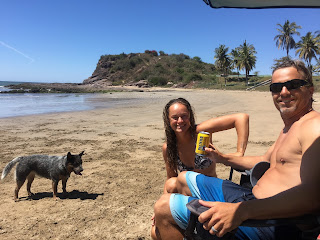 Our plan was to make our way out to Isla Isabel, a bird sanctuary and described as the Galapagos of Mexico.  This was an overnight passage of 95 miles where we sailed the first half and motored throughout the night and early morning.  It was a really cool place to visit, and although dogs are not allowed to go hiking, we did find the beaches and local fisherman receptive to her staying below the high tide line for morning and evening bathroom trips.  As for anchoring, we motored around and through the recommended south anchorage, it was very deep, 65-80' until you were close enough to the walls of the cliffs that the spray from breaking surf was nearly hitting you.  Suffice it to say we did not anchor there.  We went around to the east side which is supposedly the 2nd best anchorage and found good holding on a sand bar that extends out into 25' of water.  We stayed one night and got a great 3 hour hike in on the island where we got up close and personal with blue footed boobies and huge frigate birds.


From Isabel we aimed for San Blas which was only supposed to be an 'easy' 45 mile day trip away.  Oh man.... easy..... a four letter word.  Stupid me didn't check the fuel levels before we left and after motoring long enough to get 2 miles away from the island and get the fishing poles out, the engine up and quit.... putt...putt....stop.  Luckily the conditions were pretty benign, no wind and small seas, but Monica was dealing with a stomach virus and this wasn't helping.  I immediately suspected the fuel as we hadn't changed tanks since leaving Ensenada 3 months and well over a 1,000 miles ago.  Took me about 30 minutes to switch tanks and prime the fuel lines with our manual primer pump, and we were off on our way again....or were we??

We've been due for some odd ball troubles and we got them on this leg to Puerto Vallarta.  After priming the fuel lines, I forgot to take in the fishing lines, and after bobbing around for a half hour they had wrapped themselves around the prop pretty good, and putting the prop into gear didn't help.... so out came the new SNUBA system and in the water I jumped to cut fishing lines.

We did end up making it to San Blas that afternoon, had to motor the whole way as it was pretty calm.  Caught 3 good size Pacific Crevally Jacks but they're not great eating so threw them back, but they were good fighters.  We found the anchorage around the corner in Mantanchen Bay to be very agreeable and stayed here for 4 days.  Although the pesky mosquitoes and no-see-umms are as bad as we'd heard reported on shore, we really enjoyed our time on the beach (just not early morning or around sunset) and the family we met at Restaurant Playa Hermosa was unforgettable!


In San Blas we had a couple of fun day trips, one into town to view the old fort, and just an incredible trip up a river in a panga, through the jungle and to a crocodile sanctuary then to a fresh water swimming hole!

San Blas was one of the original ports for the Spanish and was a major ship building area.  The proximity to the capital town then of Tepic and the natural harbor made it a desired port for all explorers and this area saw it's fair share of wars, thus a fort was constructed.

As for the jungle boat tour, all I can say is this a must-do for $10 a person for the 3 hour excursion.  Here's a bunch of pictures:


From San Blas we made our way to Chacala where we bow and stern anchored for the first time on SeaGlub.  You have to anchor fairly close to the beach and there's some slow rolling swell that comes through.  The stern anchor helped us stay pointed into the swell when the winds would try to make us do otherwise.  Our technique was to have all the stern anchor rode laid out, drop the stern anchor and pay out as we motored forward until the line was fully out (200') and then drop the bow anchor and as we backed down the helmsman slowly took in the slack on the stern.  Worked like a charm and found a great new anchorage for 3-4 days.  I also found an idyllic surf spot about 2 miles north.  Looking very much forward to returning to this spot.

The day trip we took here we'll figure how to do better next time.  We couldn't find a guide to take us which, I guess, is the normal way to do this, so we took a bus then another bus then got dropped off in the middle of nowhere and were told to walk down a dirt road for about an hour..... I guess we're getting more brave.  What we found at the end of a 90 minute hike (remember we had to do this again to get out then flag down a bus or cab) was 4,500 year old petroglyphs.  We were by ourselves and after reaching the petroglyphs, we felt like we had accomplished something and were viewing something very few people would take the time to see.  It's said that this hike up the dry river bed (it's dry season here) was a place to pray to the earth to deliver water to the valleys. 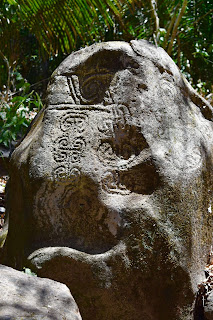 The sail to La Cruz de Huanacaxtle just north of Puerto Vallarta was uneventful,  except for catching two more Jacks  We motored the full 45 miles as we had no wind until the last 5-8 miles (and then, of course, it blew 30 knots!).  After pulling into our new slip (likely our home base until November) we were informed it was movie night in the marina and we made our way over to the outdoor amphitheater for a relaxing evening.