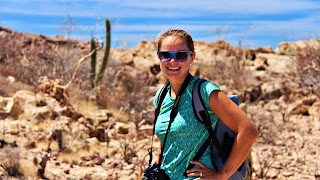 So after getting Shamaya off the rock near Bahia Ventana, we headed north to El Refugio on the north side of Angel de la Guarda.  This is as far north as we'd go and, when we left several weeks before, hadn't really planned on making that far north.  But then again, that's probably one of the best things about the cruising lifestyle, plans change all the time.  El Refugio was amazing, beautiful, we got in some great fishing but we did have a major downside event, Monica got hit by a sting ray.  We landed the dinghy and there was only 6" of water below the dinghy, she shuffled and took a step towards the beach but then turned around to help drag the dinghy to shore when she got hit by a sting ray that had been under the dinghy.  A painful day to be sure, but she made it through like a champ.  We soaked her foot in hot hot water for about an hour and then she rested and by the next day she was walking on it again.

From there we headed to the south end of Angel de la Guarda and had a most amazing experience with dolphins while anchoring.  After we had the anchor down the dolphins hung around and we got the dinghy down and played with them.  See video clip below:

Next up was Isla Tiburon.  We tried to sail as much as we could and were going along fine until the tides changed and we caught 3 knots of current on the nose.  Boat speed was 5.5 knots but speed over ground was only in the 2s.  Bahia de Perros was nice and we enjoyed the hiking.

Our next landing was on the mainland, Bahia San Pedro.  A scenic bay, but be aware, there's a lot 'stuff' under the water, trash, cables, old refrigerators or something and we had to help a single handled sailor get his anchor unstuck.

Algodones was a fantastic place and our first reintroduction to regular society, cell phone reception, bars and restaurants.  San Carlos was just around the corner and we thoroughly enjoyed our time there.  We took a bus into Guaymas, the town was fine but the Fonatur marina was crap, very exposed, rundown, and couldn't guarantee depths through the bay to approach.  So back to San Carlos it was for us, where we took a tour of the storage yard and enjoyed a few more days at anchor.  We would go back to San Carlos if the opportunity arose in the future, one of the upsides was the proximity to the USA border, just a half day drive.

Next up in the following blog post, we would cross back to Baja to meet friends from Cabo for a week long sail along the central Baja coast..... 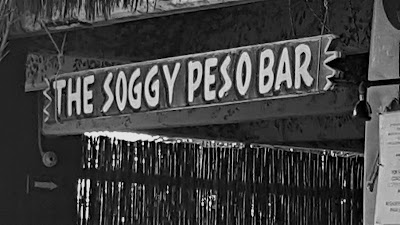 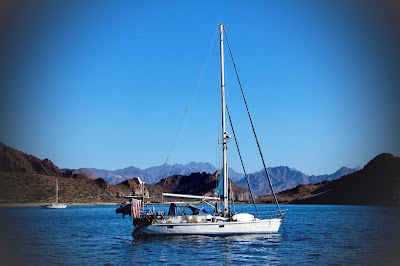